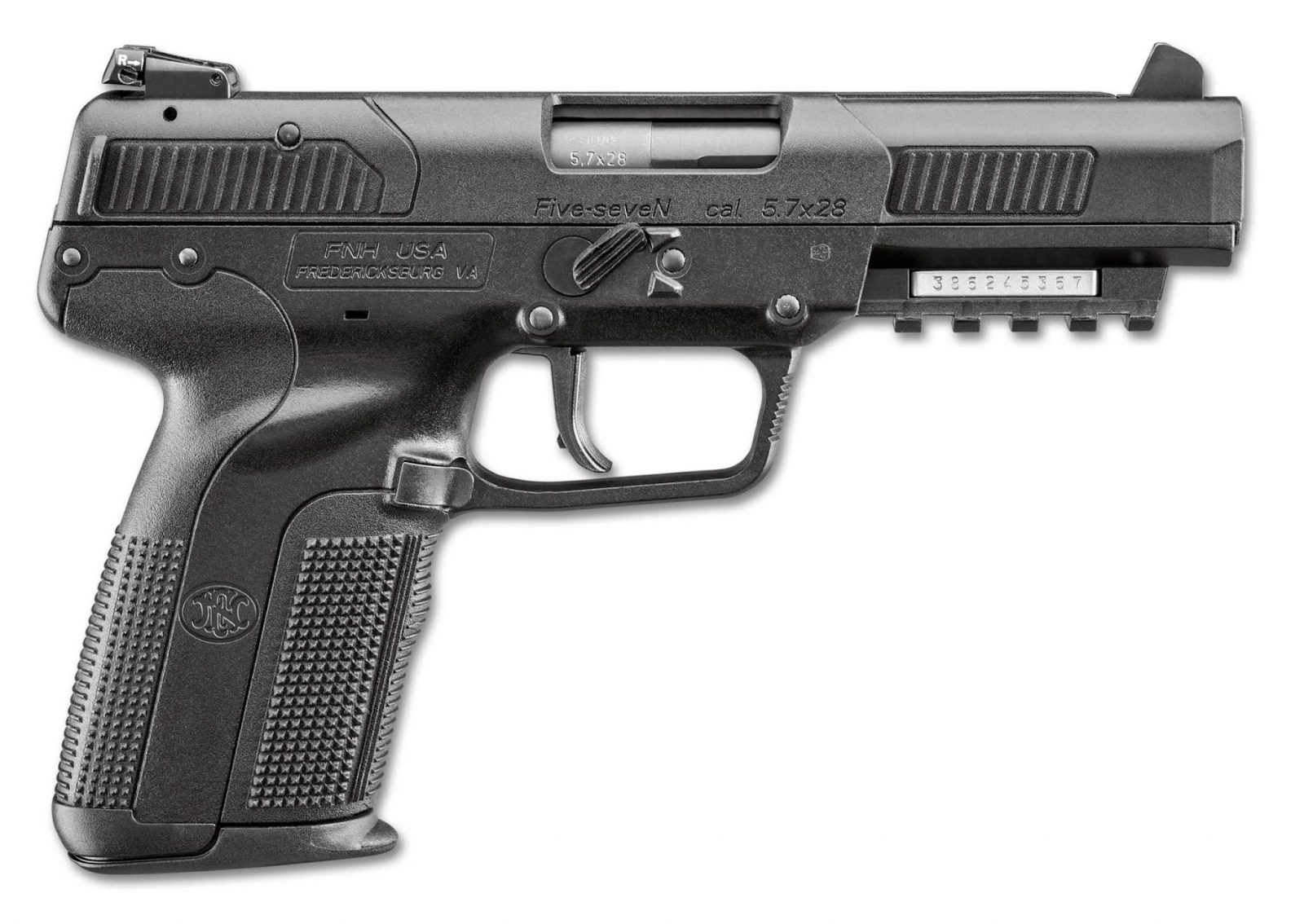 The FN Five-seveN pistol is a rare gun that you’ll instantly fall in love with despite its steep price point. Thanks to its impressive design, performance, and firepower, you’ll find the FN Five-seveN pistol quite appealing. The gun was also featured prominently in the new Netflix feature 6 Underground starring Ryan Reynolds.

Developed in the early 1990s and features a cold hammer-forged barrel that uses a chrome lining for extended use. It was initially designed to NATO specs as a personal defense weapon. The 5.7x28mm typically loads bullets ranging from 25-40 grains with velocities exceeding 2,000 FPM, making it perfect for close-quarters combat. One unique thing about this gun is that it features a 5.7x28mm cartridge which the gun is built around.

Read More about the 5.7x28mm at Wikipedia.

Without a doubt, the FN Five-seveN pistol is the unicorn of the gun world. It is highly impressive, powerful, lightweight, and performs well in extreme temperatures. It could even be developed on the same production line as the 5.56x45mm NATO round.

The all-powerful FN Five-seveN is a full-sized pistol with compact weight. It features a polymer frame with some internal components made from steel. Although this gun has a long grip that is thinner than most full-sized pistols, which makes it a bit uncomfortable for some hand sizes, it has ambidextrous controls that are uniquely placed to allow for easy trigger manipulations.

Given the size of the grip, it looks a little odd, but you’ll get used to it with time. And because the gun features a round with uncommon ballistics, it comes with adjustable rear sights for both windage and elevation, giving users a pleasant shooting experience.

Due to the size of the 5.7x28mm cartridge, you can fit in 20 rounds into a single magazine.

Did we forget to add that this gun has a brilliant magazine with flawless design? Oh yes, its magazine is unique, lightweight, and holds up to 20 rounds. As a matter of fact, they load in a similar fashion as the standard AR magazines.

Shooting the FN Five-seveN pistol is an absolute joy. Its lightweight polymer frame guarantees a comfortable shooting range while loading magazines is a stroll in the park. Unfortunately, its trigger isn’t that impressive; nonetheless, this is compensated with a crisp break and moderate pull weight. Whether you are a novice shooter or a seasoned vet, you’ll instantly fall in love with this beauty.

This fantastic gun has an extraordinary and futuristic look. It comes in either an all-black finish or tan frame with a black side. Designed with the end-user in mind, this gun has a rail that can be outfitted with a light or laser. Also, you can use a threaded barrel with this gun.

Read our article on the Best Pistol Lights.

Can the FN Five-seveN be used as an effective carry gun? There is a lot of disagreement among professionals as to whether it can, but here is what we think. While the FN Five-seveN pistol was designed as a full-sized pistol it’s dimensions are not much different than many Glocks and other polymer pistols that people carry every day. I think the real concern people have is whether the 5.7x28mm is a round you would trust with your life.

Regardless of what you think, there is no denying the fact that this gun is extremely lightweight, has a nice trigger, incredible magazine capacity and in my opinion plenty of stopping power. Sadly, it is pretty expensive to use as its ammo is currently around $0.50 per round.

Basically, it all boils down to a personal choice as to whether this is a perfect carry gun or just a fun range toy to impress your friends. I’m not particularly eager to sit on the fence as I believe that there are lots of options for full-sized EDC and this should easily be included.

Without mincing words, the FN Five-seveN pistol is impressive. From its ergonomic design to its remarkable performance and accuracy, this gun is one of a kind and will leave you breathless every time you fire a shot. If you’re on the lookout for a tactical style pistol that is sleek and reliable, you’ll definitely find the FN Five-seveN pistol absolutely worth it.